Tonight I went to the Welsh Millennium Centre to see Dan Rhodes. That there were other people performing was cool, but ultimately inconsequential. I certainly wouldn't have gone to all the trouble of convincing my wife to drive us to Cardiff if he wasn't on the bill. Especially with the Torchwood guys now decamped to the US - I mean, who's protecting Cardiff Bay from irregular rift activity?
I'd not heard of Rhodes until late last year, when my university tutor gave us four passages of prose to 'try on' in terms of style - one by Susan Sontag, Grace Paley, the brilliant S.J. Perelman, and all 101 words of Dan Rhodes' 'Baby', from Anthropology. The story I submitted for that assignment has already been on this blog, it's called 'Uncrossed'.
Something just clicked about it with me. The concrete surrealism, the concise and precise language, the blatantly obvious attention to microscopic detail. The empathy, the sadness, the humour, the pathos. I bought the book.
Since then, I've read everything he's written. Nothing has disappointed. I adore his digressions, an example being the lives touched by the titular character in Timoleon Vieta Come Home - each tiny bubble as well-rounded and fully developed as those surrounding the book's 'main' characters.
Rhodes has found a way to fuse the miniature perfection of short stories with the depth and length of a novel, and successfully create books that encompasses his clear talent for brevity, clarity, structure; wit, irony and utter, utter heartbreak.
Anyway, where was I...
So I went up to him at the end of the thing (show? performance? evening?) and was really rather nervous - I've never done this to a writer before, only bands, and they don't count - and asked if he would sign my copy of GOLD, and he did and we had a little chat and I went home having met my favourite author (sorry Ali Smith, sorry Douglas Coupland, you'll have to make do with 2nd and 3rd).
Everything he has written has inspired. I know as a writer I'm not 'funny', but as a reader, I do enjoy a smile with my wordplay. I try to make my own prose as tight as possible, never a sentence where a word will do. Like many new writers, I've had an over-descriptive prosaic flowery-language spell: not anymore, I'm over it now.
This is not to say that I want to bottle his literary gift and repeat and mimic and imitate and purloin: far from it. I'm not 'that' kind of writer, and while I love his stories, they aren't 'my' stories. But they are brilliant ones that even though I wouldn't / couldn't write them, I love reading them. I felt humble just shaking his hand. Why that Dan Brown fella sells more than Rhodes does, I just don't know. It's not fair.
It's late now, and I don't really have the words right now, but Dan Rhodes, honest to blog, is a fricking genius. And a really nice person too*.
The End.
* Based on reading online interviews and having a three-minute chat with him.
Posted by Jamie Woods '77 at 2:19 AM 2 comments:

A Story by Someone Else

One of my fellow students on the OU Creative Writing courses had one of her short-stories read out at some sort of reading out short stories event, held somewhere in England.
It's very good. It's by Cathy White, and it's called I can see through people. And this is a video of it. Well done Cathy!
Cathy also writes several blogs, including the relentless jogblog, which is ace.
Posted by Jamie Woods '77 at 1:42 PM 1 comment:

Poem: Consoling Myself After Your Affair

Consoling Myself After Your Affair
After James Tate.
My television is mocking me:
staring me into a strange proposition - the beguiling seducer -
compelling me to stare back and be sucked into its pixels.
No, [presses button] I have remote infrared power
sending out infrared beams to distant civilisations.
(It has no idea it is doing this,
it thinks that it is just sending out ‘On’ ‘Off’ ‘117’
but it is actually calling out to occupants of interplanetary craft
‘Come to Earth, invade, it’ll be fine
if you do it on a Saturday, around X-Factor time’).
I don’t need a custom kitchen or MTV or CSI or
to text flirt with real girls in my local area.
I miss you sitting next to me so badly
like ‘And Smith must score’ but even more painful,
and with that I taste the sweet fresh air,
running away from the home that you left.
Posted by Jamie Woods '77 at 11:27 AM No comments:

Art Brut are a ramshackle bunch of chancers who met in dives and bus-stops and Deptford pubs and at school and formed a band (at which point in any Art Brut article it is vital for the writer to insert the lyric ‘THEY FORMED A BAND’ in brackets to show you’re down with the kids. But I’m not, so I won’t).

They have recently been locked in recording studio by Frank Black/Black Francis/That Fella from The Pixies for a fortnight, and have just come out clutching the master-tapes for an album that is dirty and happy and melancholy and fighty and funny and reflective. And rocks.
It’s called BRILLIANT! TRAGIC! and as a title, it’s fairly accurate. It is also a landmark in indie-rock circles – it features vocalist Eddie Argos’ singing debut. After three albums of talk-singing (his natural singing voice – it’s not irony), he sings all pretty and reverbed and sensitively. It’s kinda cute.

What do you mean you have no idea who Eddie Argos is? He’s like seven-foot tall, but not in a stringy, bandy-legged Joey Ramone way, but in a man-giant way. He’s a comic-book geek, and yet a Jägermeister and red wine fuelled rock’n’roll party animal.
‘Girls don’t like him, Boys wanna fight him’ he claimed on the song These Animal Menswe@r, but a: have you seen his rather beautiful girlfriend, b: only that guy from Bloc Party wanted to fight him, and c: seriously, his girlfriend is very lovely. Christ, this guy had a proper spiv moustache and pork-pie hat phase, yet still is clearly cool.
He’s the lead singer in about a million side-projects and spin-off bands including Everybody Was In The French Resistance... Now!, Art Goblins, Spoiler Alert!, and Glam Chops, despite his previous lack of actually singing. He does it on charisma, and stage presence, and generally having lyrics that are witty, punning, realist, funny, heartbreaking, familiar and tragic. And often brilliant. He’s equally foppish and foolish, lithe and lumbering, rock star and humble indie-kid.

Eddie Argos is not his real name. His real name is Edwin Argos. He prefers the more informal ‘Eddie’. The rest of the band have suitable made-up names, too:
* There’s Freddy Feedback on bass (a girl called Freddy!), the German bassplayer, who sings along microphone-less all show long.
* Ian Catskilkin (a made-up name and he chooses ‘Ian’! Hilarious!) is the guitarist, a man who has been hit with a widdle stick, and yet knows when to rein in his rocking for some nice little melodies.
*Jasper Future (real name Jeff Fulcherington-Smyth) holds the rhythm guitar, upon which he often plays the right chords, inbetween doing backing vocals and precision pointing, in the air and at the crowd. He also does a really good ‘wait for it’ in the quiet bits of songs.
*Mikey Breyer (real name Mike Breyer – the ‘y’ is far more rock) is a stand-up drummer. Not in a comedic way, but in a standing up to play drums way. Also German.
From a post-modernist point of view, Eddie’s self-referential lyrics are not a vain or desperate attempt at meta, but are clever and genuinely warming. As he ages through the albums we leave the teenage boy still in love with Emily Kane; to a young man to idealistic to settle down – ‘People in love lie around and get fat/ I don’t want us to end up like that’; to a singer on a rock’n’roll cliché mission ‘Parents/ Please/ Lock up your daughters’; and finally get to meet the grown-up-ish Argos who now lives in Berlin with his partner ‘People in love lie around and get fat/ I think I’m OK with that’.
Did I do the ‘formed a band’ (they formed a band) bit yet? Oh. Well, the thing is, every time I hear them I’m glad they did. An energetic and explosive live band who love nothing more than to talk about mixtapes with the kids in the audience after the show; a band who combine humour and sincerity like only the very best writers; an enjoyable stomping guitar noise, jangly and angular, melodic and rocking.
If Art Brut didn’t exist, only Eddie Argos could invent them. And I love him for it.
------------------------------------------------
www.artbrut.org.uk

Art Brut's BRILLIANT! TRAGIC! can be bought in all good record shops. Including this one. And iTunes and whatever the kids use for their Mp3pod things.
The Comic Book to accompany this LP, featuring work by Bryan Lee 'Scott Pilgrim' O'Malley, Akira the Don, and Jamie 'Phonogram and Suburban Glamour' McKelvie, amongst others, can be bought from here.
Posted by Jamie Woods '77 at 2:18 AM No comments: 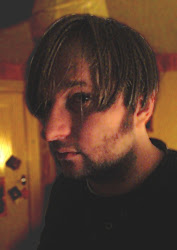